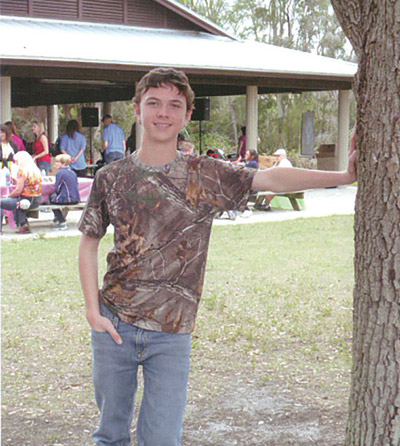 Last summer, Caleb Isenhour spent carefree days boating, fishing, target shooting and honing his billiards skills with his dad. He had no way of knowing his father Sean, 53, who was a licensed charter boat captain, would die suddenly in September from contracting the vibrio vulnificus bacteria after cutting his foot in local waters, then eating raw oysters.

The swift and profound loss sent Caleb, 14, into an unsettling spiral of grief. “I was a little mad and felt uneven with myself,” he says. “I was kind of yelling at God every night and feeling mainly low.” To help understand his deep sadness and confusion, Caleb signed up to attend Hope’s Rainbow Trails camp.

For three days, Caleb and 70 other children and adolescents slept in cabins, sang along with a guitar, created art, toasted marshmallows, and most importantly, shared their stories and memories. Along the way, they realized that they weren’t alone in their indescribable sorrow.

“There was every different kind of grief you can think of,” Caleb said, noting that it was helpful “making new friends, talking to people you’ve never talked to before.”

The campers at the annual Rainbow Trails camp are broken into appropriate age groups and assigned “buddy” counselors. Hope chaplain Cameron Plummer was Caleb’s buddy. Plummer says the camp breaks down the isolation and alienation young people experience from a sudden loss and its effects, which family, neighbors and peers may not fully comprehend. “It gives them the space and the tools. It’s not top-down. We’re setting up places where they’re empowered,” says Plummer.

Caleb was the first to share his story of his loss at camp. “He was strong and brave,” says Plummer. “The dignity he showed touched the other kids and they were willing to share their stories. That’s the power of Rainbow Trails. After that weekend, you can begin healing.”

Caleb says the most significant activity was planting a tree, then planting a letter to his father underneath it. “It was so powerful. It hit me like a 10-ton brick” Caleb says.

“I’m still confused why this happened, but not so angry anymore,” Caleb said.

Your gift provides medical supplies, home care, art and music therapy, and counseling for kids of all ages.

Please contact us for copies or transfers of medical records